Skip to content
0 comments
Tags
Share
We are proud to introduce our latest contributor, Seeababe Julie Cox, who will be schooling us all regularly on surf history from here on out. Well qualified to do so, Julie is the Operations Manager at the California Surf Museum in Oceanside, is a former professional surfer herself, and played an integral role in creating the highly successful WOW (Women on Waves) exhibit, featured at the museum last year. 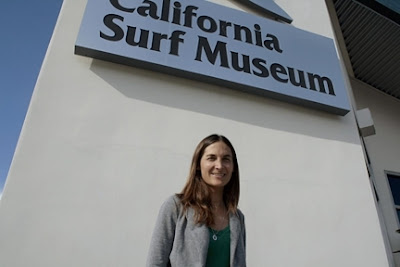 photo Foam magazine
To start, tell us a little about your own surf history.

I fell in love with surfing around the age of 8, though I wasn't surfing regularly until about age 16 (after I got my driver's license!). Before I could drive, my mom would take me, or I'd catch a ride to the beach with my neighbors, the Colling's Family. I enrolled in the Jr. Lifeguard program at Leo Carrillo State Beach one summer, and went every summer after that. I loved the challenge, freedom and feeling that surfing gave me. Plus, I was meeting such interesting people at the beach, I was totally hooked.

After high school, I went to college at UC Santa Cruz where I surfed, traveled up and down the coast doing contests and also traveled internationally, while pursuing my degree. I was sponsored by Roxy and also taught at Las Olas Surf Safaris for women down in Mainland, Mexico. I started putting my creative side to work in 2005, when my shaper Jed Noll and I decided to create a line of women's specific surfboards called the "Jule Collection". I simply loved being involved with surfing in any way I could and continued to find opportunities to keep up with my passion. Though I stepped away from competition recently for the sake of mixing it up, I still surf regularly and am surrounded by surfing all day long at the California Surf Museum, where I work. 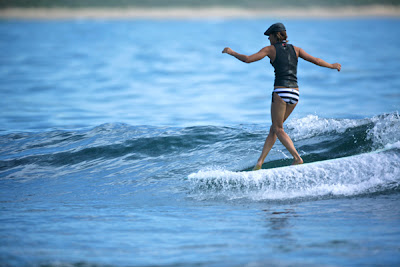 Julie styling - photo Lorene Carpentier
Let's talk about the popular Women on Waves exhibit. What part did you play in creating it?

My role was to research and write the manuscript for the "1990s to today" segment, and to gather artifacts to go with it (boards, wetsuits, bathing suits, trophies, photos, etc.) I also helped install the exhibit and had the pleasure of organizing events and led many tours of the exhibit itself. WOW was an amazing accomplishment. Currently, I am working with my team on publishing a book of the exhibit. It ran for 1 year and was a huge team labor of love. My favorite part of the whole process was meeting these amazing women and learning about their incredible lives. 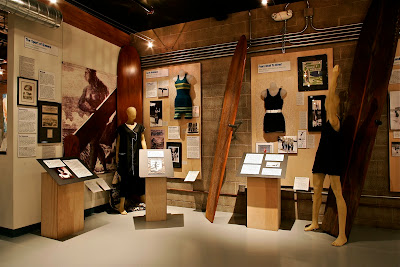 WOW Exhibit - Photo- California Surf Museum
Which movements in women's surf history inspired you the most?

For me, the most obvious movement that inspired me was Lisa Andersen in the mid 1990s. Seeing advertisements of Lisa in the male dominated surf magazines gave me inspiration that girls could surf. Those were empowering ads and she was leading a whole new generation of surfer girls, like me. Now that I've learned more about the history of women's surfing, there are a handful of movements that really inspire me. 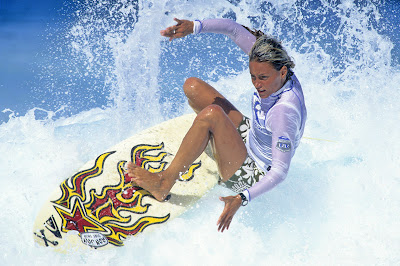 If you could go back in time to surf, what era would you choose & who would you take along?

Hmm... It would have been fun to surf Malibu in the early 1950s, before the Gidget boom. I would take Rell Sunn with me. I would have loved to meet her and hang with her. 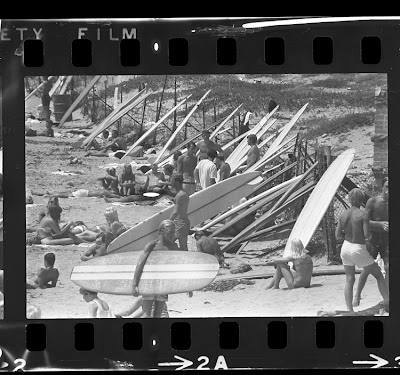 photo Malibu Beach News
Who is the most inspiring woman surfer you've met, from the past or present?

So many of the girlfriends I grew up with are inspiring... I could go on an on, but while working at the museum, I would have to say that Marge Calhoun and Donna Matson are incredibly inspiring. Keala Kennelly too... 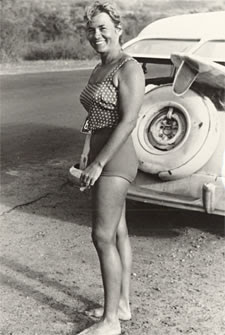 
You recently did some modeling for the new Seea catalog. What is your favorite suit?? 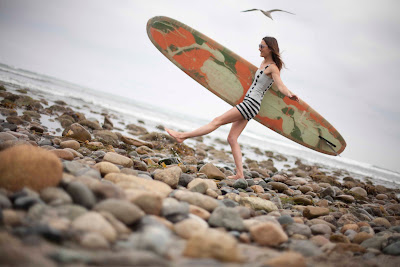 Julie at San'O, Seea photo shoot - photo Aaron Checkwood
We've come a long way since the video below of PV Cove in the 40's, but retro suits are still the coolest!! Keep on the look out for more posts and fun filled surf history soon. School is out! Thanks Jules!